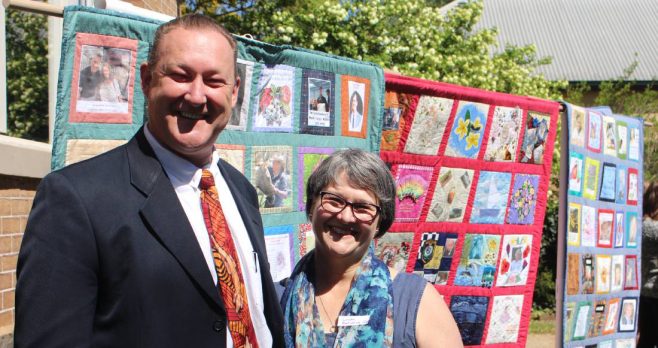 Palliative Care Service quilts a chance to say thanks and remember

As the sun shone and the first hint of summer breezes blew on Saturday, the garden at Zona was full for a different kind of celebration.

About 200 people came to remember those who had died in palliative care over the past 12 months as part of an annual event organised by Orange Palliative Care Service support staff which has run yearly for nearly two decades.

The event is designed to bring bereaved families and nurses back together after the death of loved ones, which is part of palliative care supporting people to deal with grief.

“A significant part of our work is bereavement support, and a number of volunteers have been working with them for a long time….”

Sandra Russell’s husband Robert Griffin – whose grandchildren knew as “Bobby” – died 12 months ago on Tuesday, and she was in attendance on Saturday.

She was one of more than 50 people who’d put together felt squares which staff had put together into two quilts, with the square remembering Mr Griffin featuring a photo he’d taken in France.

“He was called the plant hunter because that’s what he did, he hunted rare plants and took photos of them,” she said.

Ms Russell said the squares were a lovely concept, and she’d put hers together “to thank palliative care”.

“They’re such an amazing team and nothing is a problem to them, there’s genuine care and empathy,” she said.

Orange Palliative Care Service doctor Louis Christie said Saturday’s event, which included a service, readings and an opportunity for bereaved families to come forward with memories, photos and messages to stick onto a whiteboard, was the largest one they’d held.

NALAG Volunteer Coordinator role up for grabs in Dubbo