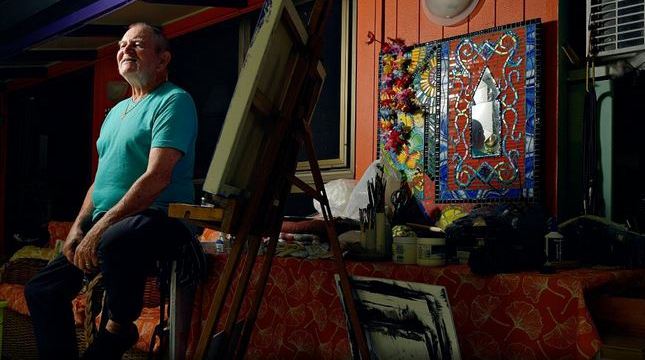 Opening up on a taboo subject

See the original article by Jill Poulson in the NT News.

One man who isn’t afraid to talk about dying is palliative care volunteer Mike Foley.

“I can tell you that I have absolutely no fear of it — I understand completely what death demands of me and the preparation for dying for me is a clear task,” he said.

But Mike, 77, is in the minority. Ninety per cent of us will never share our end-of-life wishes and almost half of us — 45 per cent — will die without a will.

In his role as a palliative care volunteer, Mike is part of a team who is there to provide comfort and support to patients that are in hospice and preparing to die. “I don’t think I’ve ever done anything more meaningful than just hold the hand of somebody who needs and craves a little bit of comfort,” he said.

“In most instances dying, although it’s a major part of one’s life, is something we don’t put a lot of thought into and then when then the time comes we’re so unprepared for it.

“For some reason that business of being able to talk about it is the one thing that just doesn’t seem to happen.

“We sit down at the table and have a few drinks and enjoy the company of family and friends, but we never talk about dying, and so subsequently when people get to that stage, when people find themselves in a hospice, they have the opportunity to get their heads around it and the situation they are confronted with.

“And we are there to help with that in a compassionate and caring and loving way. It’s not an easy task but it’s a privilege.”

On Tuesday, Darwin will host its first Dying to Know Day event and Mike said he hoped many in the community would attend to “help lift the veil of secrecy we tend to cover this subject with”.

“It’s an opportunity to get your foot inside the door of facing the reality of death and dying … once they do they’ll find death and dying is not so much of an ogre but it is an important function of living on this planet,” he said.

She said being able to talk to your friends and family about what you want and don’t want at the end of your life was vital.

“The whole idea around this is to get people to engage in conversation about death and dying, and in stimulating conversation around it … hopefully people will be less terrified by it,” she said.

Dr O’Connor, who has been working in palliative care for 10 years, said she was passionate that death and dying should not be a neglected part of life.

“It’s the final stage of living and for me it deserves to be treated with the utmost respect and consideration,” she said.

“It’s a really significant period in people’s lives and it deserves to be well managed and well looked after.”

For Mike, there’s no reason why death can’t be cause for celebration.

“We celebrate many things about our lives but we never apply those celebrations to death,” he said.

“We should be changing our mindset to celebrating that really special part of living and make it as much as possible a joyful event — there is plenty of time afterwards for those to grieve. Be happy and make the journey easier.”