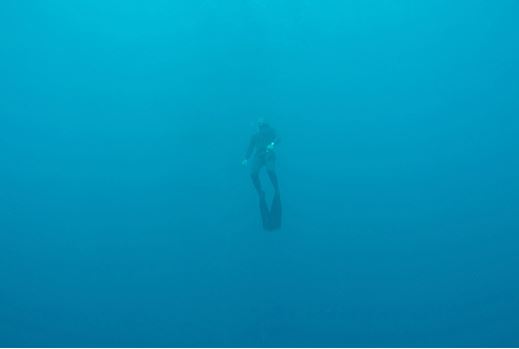 Dying. To know how to express the sacred

“It is only when caught in the swift, sudden turn of death, that mortals realise the silent, subtle, ever-present perils of life”. Herman Melville

For Adams, Freediving holds many metaphors about life and death; deep immersion, the amniotic experience of suspension, a heightened awareness of being part of a liminal or transitional state, that in life we consciously engage with death.

Talking about his essay at the University of Sydney last night Adams said “Freediving has taught me a new way to appreciate death…the blue embrace of an alternative world. That vast space is an embrace, an opening”.

As an academic often working with indigenous people Michael found himself speaking into situations with a rational worldview but “realised that I was being spoken to in a very non-rational way, I came into the discussion talking 'this and that', but people were responding to me with a very different sacred narrative. And I didn’t want to lose that”. He brought this into his writing of Salt Blood.

Michael talked about his inter-generational role in sharing the wisdom of life and death with his children.

“We are all going to die one day…we can push that away, in different ways, in different paths, but in the end we will die…I have an unfinished role in teaching my kids about death”.

Adams said that he found writing to be the most comfortable way of sharing his deepest vulnerabilities with his closest and dearest.

Today on Dying to Know Day we are encouraged to share our ideas and thoughts about death and dying with others. Adams chose to share by writing.