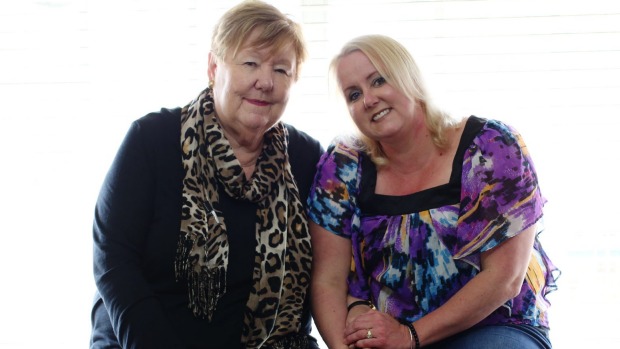 Palliative care volunteer Lainie Harnett expected to take on some household chores when she was sent to her new placement. Instead she met Sandra Wright and her family, and a unique bond was formed. SANDRA: It was 2009 when Hayden was diagnosed. He was just 11 months old. We had noticed some developmental regressions a few months earlier but physiotherapy seemed to be helping him. Then the seizures started.

I had never heard of Menkes syndrome. None of us had. Our education was swift. Menkes syndrome is an extremely rare disorder that affects copper levels in the body. It is characterised by kinky hair, failure to thrive and a deterioration of the nervous system. We were told Hayden probably wouldn’t reach his first birthday.

My training emphasised the importance of keeping a professional distance but the connection between Sandra and I was unavoidable.

Lainie came into our lives three months after the diagnosis but our meeting almost never happened. I was approached by a member of the palliative care team at the Children’s Hospital at Westmead [in Sydney] who told me about a program that places volunteers with families to provide whatever help is needed.

I was very sceptical. I didn’t want to let anyone in. I wanted to go home and keep my family protected in a little cocoon. But with two-year-old Jake as well, I knew I was going to need the help, so I reluctantly agreed to a trial visit.
Advertisement

I need not have worried. When I opened the front door, Jake leapt off the stairs and into Lainie’s arms. It was extraordinary. Jake wasn’t the lively boy then that he is today. He’d just spent three months going to and from appointments and spending hours in palliative care environments amid frightening medical equipment. I said to Lainie, “Well, you’ve got the job.”

As quickly as Lainie became a friend, she became family. She was like a mum to me and a grandmother to Jake, Hayden and, when he arrived in 2012, Saxon. That was important. She was one of the first people to visit me in hospital when Saxon was born. She was at every birthday party. It’s not what we expected to come out of the program but we are so grateful for it.

Hayden died peacefully on April 8, 2013. He was just five years old. I called Lainie immediately. She was a rock during that time. At Hayden’s funeral, after my final goodbye, I turned away from the coffin and Lainie’s was the first face I saw. I will never forget that.

Early in our friendship, Lainie shared with me that she had lost a son many years ago. The loss of a child is the worst hurt that anyone can experience and our shared grief strengthened our bond.

Lainie doesn’t visit as often as she did before Hayden died. I know why and I understand. It’s too hard for her. But nothing about our friendship has changed. We still speak all the time.

She has taught me that family doesn’t have to be blood.

LAINIE: My daughter introduced me to the palliative care volunteer program. She worked at the Children’s Hospital at Westmead and, given my background in counselling and child protection, thought the program would suit me.

It seemed like everyone at the hospital was already in love with Sandra so I was looking forward to meeting her.

I turned up thinking I would do the cooking, the cleaning, the ironing. I did none of that – I might have ironed three shirts in three years. Sandra is the most organised woman on god’s earth and she had all that stuff done before I arrived.

On day one we sat down and had a cuppa and the friendship was instant.

It made me a bit of a rule-breaker, actually. My training to join the volunteer team emphasised the importance of keeping a professional distance and that this was not about making new friends. I had every intention of abiding by those guidelines but the connection between Sandra and I was unavoidable.

I would go over about once a week. I would encourage Sandra to have a sleep while I spent time with the boys, teaching them things like colours and numbers. But catching up with Sandra was just as special as my time with those beautiful boys.

Sharing a cup of tea and a chat became our ritual. We would talk about the world and everything in it. Sandra is so intelligent, deep and thoughtful. We never ran out of things to talk about but we wouldn’t let it be sad. There were tears – don’t get me wrong – but we stayed positive.

She is amazing. It would be so easy for someone in Sandra’s situation to be bitter, and understandably so, but she is one of the most positive people I know.

The day Hayden died would have been my son’s 40th birthday. It was a harrowing day but Sandra was admirable as always. She was very courageous having more children after Hayden because she carries the mutated gene – something she only learnt when Hayden was diagnosed – so there was a risk.

She had Saxon when Hayden was three and Luca was born earlier this year. They are both beautiful, healthy boys and Sandra is a born mother.

Before she was a mum, Sandra had a successful career as a sales manager. She always planned to return to work when the kids went to school, but Hayden rerouted her path. Now she plans to work in palliative care. She wants to give back – I cannot think of a better place for her to utilise her skills.

I must have been about 70 when Sandra and I met and I thought I had it all sorted. I was wrong. Sandra has taught me about patience, acceptance and about never wasting time. Sandra and her husband, John, never waste time. They gave Hayden a beautiful life. He was so loved.