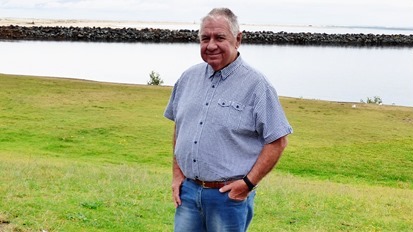 During National Palliative Care Week 2017 we are sharing stories from palliative care volunteers in NSW, collated by editor and palliative care biographer Ros Bradley over the last couple of months.

Ros asked volunteers if they would share an inspirational moment, a story of resilience, a transforming experience, a special poem, text, image or piece of music.

Along the way she spoke to some 60 of the 1,600 or so palliative care volunteers around the state, with 21 of them sending her contributions that gave us unique insights into their experiences, inspirations and inner life as volunteers.

Here is one of the stories. Thank you to all the volunteers who contributed.

I suppose it’s a bit weird writing about something that happened to me in a funny way while giving respite to a man in the final weeks of his life.

Every Tuesday morning I would go to a client to give some respite to his wife so she could go to a weekly appointment doing volunteer work at the local Museum for a few hours.

She would always leave him to me in his bed sleeping where upon waking I was to get him up and serve him his breakfast and give him a bit of a clean up then sit him in his armchair on the back veranda and have a talk about the old days in our town.

She would say hooray and be on her way.

I went straight in to check on him laying there under the doona, where he popped his head up and said ” has she gone ” I said yes.

“Right” he said, “now get me up and out into the kitchen and look up in the top shelf and get that bottle of Captain Morgan Rum down and pour me two fingers of it into a glass and top it up with coke then put it into the microwave oven for 15 seconds and I’ll have that for breakfast”.

I thought for a while and then realised with only weeks to live why not, no reason he shouldn’t have a bit of what he likes to make him happy.

Well he would have two or three of them and be back off to bed and sleep like a lamb all morning.

She would return some hours later and thank me for looking after him so well. I’m sure she knew what he got up too, but never said.

He did pass away after a while and I do miss my mornings over there with him, a bit of fun for both of us.